What is the WSGI Interface? 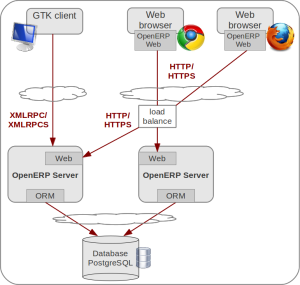 New computer programmers and IT professionals have likely heard the term “WSGI interface” at least once, whether it was in one of their classes or in a professional setting. Despite this term being commonly used in both of these professions, many people remain unsure what a WGSI interface is, where it is used, why it is used, and why it’s so important for some applications. The good news for those computer experts is that this interface is pretty easy to explain and even easier to implement in a Python-based programming or computing environment. To ensure great success in the world of advanced computer applications and programming work, it’s a good idea to understand this interface as well as where to learn more about it.

A Python Must-Have: What is the WSGI Interface?

The WSGI interface is a universal interface, developed within the popular Python programming language, that acts as an efficient intermediary between Web servers, Web gateways, Web applications, and various useful frameworks. Developed over a decade ago, the interface has been in use by Python programmers since its certification by the PEP in 2003. Since then, it has become one of the leading standards for communication between various key elements of online applications and servers. This interface essentially opens the digital “lines of communication” between various web elements, allowing for a secure and efficient exchange of key data points in a two-way configuration.

Unlike many other interfaces that perform a similar function, the WSGI interface was created as a low-level, underlying communications interface that can exist right alongside other technologies on a standard web server. WSGI works well with CGI, FastMod, mod_python, and SQL databases, for instance, without so much as a tweak or a workaround. This makes it a popular choice among IT professionals and web developers, who utilize WSGI as a broadly compatible communication protocol in cloud-based SaaS applications and much more.

Mastering WSGI: Where is it Taught?

The WSGI interface isn’t a “top-secret” protocol in use on Web servers, frameworks, and within Web applications. In fact, it’s commonly taught in both basic and advanced computer science courses, depending on whether the interested student is learning programming for the first time or returning to school to master the art of creating web applications and frameworks. WSGI is typically part of most Web programming or server administration courses, where professors focus on the interface as a key communications and data exchange protocol in today’s cloud-based environments and corporate data centers.

Though this is not a commonly understood interface among the broader Web programming community, students who specifically enroll in a computer science major will definitely encounter it. IT students may not encounter it as frequently, but it’s worth seeking out a college or grad school elective that teaches WSGI regardless. Since this protocol is so common among Web servers, applications, and frameworks, a solid understanding of its inner workings will make it easier to set up and maintain online infrastructure well into the future. For those IT professionals who want to avoid returning to school, a search of online resources may prove helpful, according to Forbes.

Communication between Web servers, web applications, and major Web frameworks, is a key part of keeping the modern Internet online. There are many competing ways to do this, but the WSGI interface is easily the oldest and one of the most popular ways to ensure that the lines of communication are kept open, efficient, and secure.