What is a Freelance Web Developer? 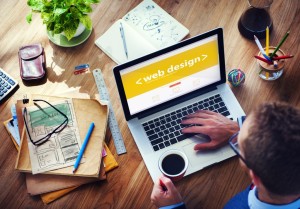 A freelance Web developer brings a client’s website vision into reality, but the path in this career field isn’t always as straightforward as it might be for other professions. Today’s technology makes it possible to pursue careers outside of the traditional 9-to-5 realm. Many Web designers, developers and programmers are self-employed, which means that they work for themselves on a contractual basis. There are benefits and drawbacks to becoming a freelance Web developer, but these professionals play a significant role in how people view, access and engage in the Internet.

In essence, Web developers design and maintain websites for other people. In an age where effective advertising depends on a properly maintained online presence, developers can make or break a company’s reputation. In addition to the design of the website itself, Web developers also have to keep up with the site’s functionality, including how it operates, how many people can access it at one time, general traffic flow and other technical aspects. They need to understand and use technical codes, and they need to have a keen eye for design in order to create an appropriate site.

Despite the need for Web developers, many companies still don’t hire these professionals as part of a full-time staff. Instead, they contract with freelance developers for specific tasks or one-time jobs. Freelance Web developers work on an as-needed basis. They have no less training or education than someone who works for a company. Some people choose to freelance instead of seeking traditional employment because freelance work offers greater flexibility in terms of schedule, client base and compensation.

Web developers don’t need advanced degrees in order to progress in their field. According to the U.S. Bureau of Labor Statistics, Web developers earned an average salary of $62,500 in 2012. Entry-level positions require an associate’s degree. While developers don’t need extensive training, certification or education to become freelance professionals, on-the-job experience usually affects how many jobs a freelancer will have. Companies are more likely to hire a freelance web developer with a lengthy list of recommendations over someone who’s new to the field. A two-year technical degree will teach someone the basics of becoming a Web developer, but additional certification in specific aspects of the job could help further one’s career.

The Bureau of Labor Statistics projects a 20 percent increase in Web developer jobs by 2022, which is faster than the average for other occupations. However, this figure may not be entirely representative of the need for freelance positions. Since freelance workers set their own salaries and find their own clients, job demand is difficult to project. Still, it’s clear that there’s a strong need for people with technical skills related to Web design, maintenance and content.

Web development offers those with technical abilities the chance to explore different positions in an industry that is constantly changing, and freelancing opens up the possibilities of working with a diverse range of clients in different areas. Freelancers may not get steady wages and benefits, but they do gain substantial experience by working for and promoting themselves. In the world of technical positions, a freelance Web developer performs a variety of jobs that directly and indirectly impact how people interact in the virtual world.